Check Prices In Your Area

Heating oil usage is not distributed evenly across the U.S. In 2013, 3.2 billion gallons of heating oil went to homes in the Northeast. That’s about 87 percent of all the heating oil consumed nationwide. October through March are the months with the highest heating oil consumption as well. 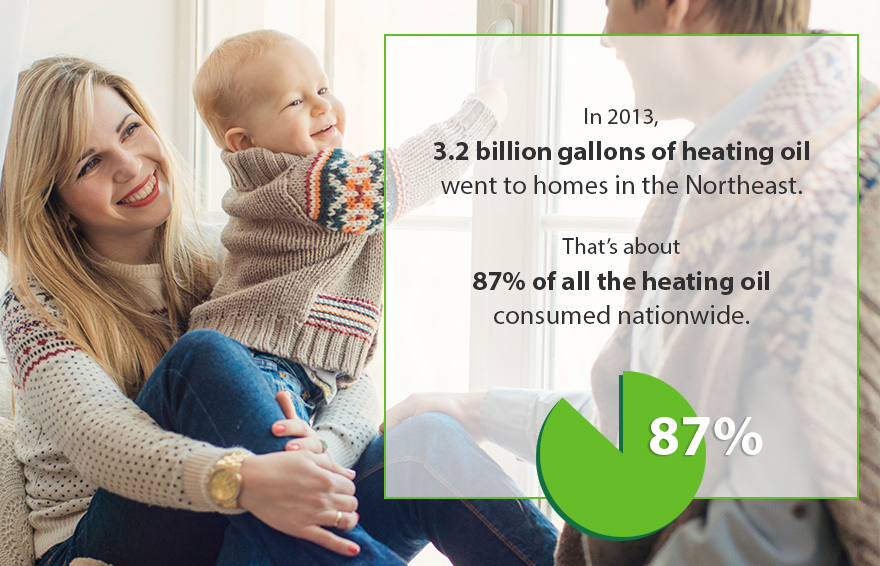 Heating oil customers also deal with price differences from year to year. The reasons why prices fluctuate can vary, but a major factor is supply and demand. If sellers have a large amount of oil available, prices are stable.

However, colder weather means homeowners need more oil. For instance, the winter of 2014-2015 created a much higher demand than normal for heating oil in the Northeast due to extended cold temperatures in the 20s and 30s.

Though the demand for heating oil usually peaks in January and February — the coldest months of the year — during normal winters, in winter 2014-2015, the demand was even higher than that normal average. Over the previous five winters, demands peaked at an average of 1.5 million bbl/d, but with the extreme cold in February 2015, that number rose to 1.8 million bbl/d.

In areas with several local oil distributors, prices might be lower because of increased competition. However, regions with fewer oil outlets could have higher prices. These are often rural locations. Delivery tends to be more expensive in rural areas, too, because they’re farther from dealers. Hauling costs figure into the final pricing.

The source of oil impacts costs as well. For example, heating oil is derived from crude oil, and bad weather sometimes disrupts the manufacturing of U.S. supplies. Political circumstances, production levels and climate issues can also affect crude oil prices from countries that are part of the Organization of the Petroleum Exporting Countries, or OPEC. Most of these nations are in the Middle East, Africa and South America.

Where Does Heating Oil Come From?

Both domestic and foreign refineries supply heating oil for the U.S., with most imports coming from Canada, the Virgin Islands and Venezuela. Heating oil arrives by pipeline, tanker, barge, truck or train.

Though heating oil begins with crude oil, some heating oil companies combine their fuel with products that burn cleaner, which improves air quality. These supplements include animal fat or oils like soybean, corn or other vegetable oils.

How Is Heating Oil Produced?

Heating oil is just one of many products made from crude oil. Gasoline, diesel, jet fuels, kerosene and lubricating oil come from the same source. Refineries distill heating oil when they manufacture other petroleum products. Therefore, their production levels determine, in part, the amount of available heating oil.

Sometimes heating oil is distilled during the summer and stored for winter usage. However, if supplies of oil run low during cold weather months, refineries make more only when they have markets for other petroleum products.

Interestingly, the Internal Revenue Service, or IRS, influences how oil heating works, too. The IRS requires distilleries to add a distinctive red color to heating oil. This signifies that road vehicles may not use the product. The color also means the oil is exempt from taxes levied on fuels for road use.